OK. My idea of the word “rustic” is not the same as the people handling the marketing for Brown County State Park’s Abe Martin Lodge. When I hear the word “rustic” I think about not having certain creature comforts that we Americans have begun to take for granted – like air conditioning, cable TV, and high speed Internet for example.

My wife and I stayed in a “rustic” cabin at the Lodge last weekend to get away for our anniversary. We also spent some time visiting with my brother, sister-in-law, and two nieces while we were at the park. All-in-all, it was a very nice weekend. 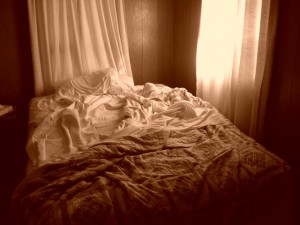 Our small cabin reminded both my wife and me of rooms in our great grandparents’ homes. It was tidy, a bit shabby, and had an indefinable aroma that brought back our childhood years. The thin oak paneling and hand-quilted sheets also added to the nostalgia.

The modest-sized TV, giant A/C unit, and surprisingly strong WiFi signal took me by surprise. What we now call “rustic” our great grandparents and probably grandparents would call downright luxurious. Granted I come from a rural community, but I thought I knew the difference between “primitive” “rustic” and “modern.” I guess those distinctions like everything have a continually changing implied meaning.