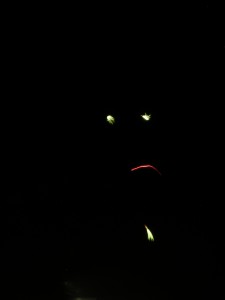 I didn’t find any pictures in my archives that had fireworks so I found it necessary to correct that oversight. I snapped off well over 100 shots of fireworks from the Brazil Rotary Fourth of July Festival’s fireworks show on Saturday night. I was less than impressed by the quality of the show – nearly every shell that detonated above the park was a boring red ball with some green around the outer edges. Yawn…

This unusual image caught my eye as I was scrolling through the doldrums that I had captured on our camera. A long, sad face to commiserate with me on the lack of gusto from the other aerial displays.

I was recently annoyed with Ghost Hunters, the series on the SciFi Channel, because they kept talking about matrixing. Matrixing is the tendancy for humans to convert amorphous objects into familiar shapes, like seeing cute, little bunny rabbits in the clouds or seeing ghosts in dirty, smudged mirrors. It seemed like that was all they talked about for an entire episode, so I had to laugh at myself a little when I looked at this picture and saw a face in the night sky. Here I was playing into their favorite explanation for debunking the appearance of apparitions. I guess that explanation may not be so much of a cop-out. 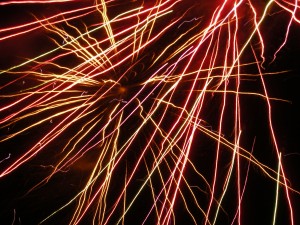 We were watching the fireworks from my father-in-laws house and to add further insult to injury, his neighbor started lighting off fireworks immediately after the Festival fireworks finale. Since we were literally right under this new display, the show was substantially more impressive – right down to the ash raining on our heads after every concusive blast.

When it was all said and done, I ended up with about two dozen shots that I felt were worth sharing with the rest of the world, but I only posted a handful of these on my photostream. Hope you enjoy!