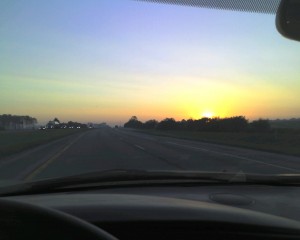 I once took a Literature and Culture course that discussed the sublime. According to dictionary.com, the sublime is “impressing the mind with a sense of grandeur or power; inspiring awe.” In the class, we discussed how the sublime was typically something vast and even frightening; this concept of the sublime comes from Edmund Burke in the Eighteenth Century.  Most of the imagery associated with this topic depicted mountain ranges and oceans. In the different periods of literature and culture, i.e, Romantic, Post-Romantic, Neo-classical, Modern, etc. there are different perceptions of what it means to be sublime.

My personal take on sublime is more of a Realist view. The Realism movement in the Ninteenth Century emphasized the importance of the “every-day” and how it can be just as powerful as the extraordinary. Every morning on the way in to my office, I get to see the sunrise. (image above taken on my camera phone a couple of days ago) It has been a long time since I appreciated just how awe-inspiring the sunrise could be.

Oddly enough the cross section of the sublime, realism, and sunrise reminds me of my two great-uncles. I was discussing literature with my Uncle Jim once – my personal tendencies are toward SciFi and fantasy. Hemingway was one of his favorites so he tended toward the more realistic. He once told me that if I wanted to write, I should write about my family because there were enough interesting aspects within that one topic to keep a writer occupied for a lifetime. While I don’t disagree with that assesment, I still feel an affinity for wizards and dragons.

His brother, my Uncle Phil, lives in Hilton Head. He is equally as insightful as his brother was but in a less bookish sort of way. I went on a family vacation to his home several years ago with my dad and my two brothers. I am not typically an early riser so I stayed up all night to watch the sunrise over the ocean.

Wise uncles and sublime sunrises – both brilliant in my opinion.