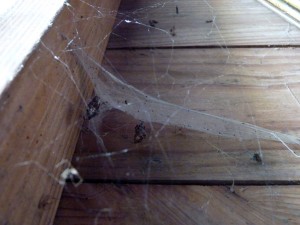 I decided to have a staring contest with Mother Nature this fall. I really didn’t want to have to start burning fuel oil to keep the house warm so I simply left the furnace turned off. In my home office and bedroom, I have a small space heater in each to help out the flaming monster in my basement when winter decides to really get nasty, so I just chose to wear sweatshirts and kick on those heaters when necessary.  Thursday morning at about 6:20AM after hitting snooze a couple of times, I walked into the bathroom. As my right foot hit the linoleum floor, I blinked both literally and figuratively. The icy caress of the toilet seat sealed the deal. I went downstairs and looked at the electronic thermostat, “54°,” read the little LED. I could hear the screens on the storm windows thrum as a gale whipped around the house urging them into a frenzied, staccato titter – the unmistakable sound of Mother Nature chuckling to herself.

I knew I had left barely any fuel oil in the tank as the cool days of last spring drew to a close and I didn’t want to run the dregs of that leftover sludge through my furnace and foul the points. I called the local oil company and ordered a delivery. It’s an elegant arrangement; I leave a check tucked inside the door, they leave me with a somewhat less empty tank of fuel. You think gas prices are bad!

Just to thumb my nose at Mother Nature, the Shakespearean equivalent of flipping her the bird, I didn’t tell them to rush the delivery. On a side note, you don’t ever want to actually flip a real bird at Mother Nature. Trust me; I know a guy – it didn’t end well. Anyway, I live out in the country damn it! I can tolerate some cold. Maybe I would get my delivery today, maybe tomorrow; I might even have to tough it out through the weekend.

Within an hour I had a hundred gallons of fresh fuel oil sloshing around still agitated from the force and speed of the delivery into the tank in the basement. I wouldn’t have been at all surprised if earlier that day it had been crude oil still warmed in the womb of Mother Nature and she had lovingly expelled it from her so it could be refined and delivered just to raise my level of agitation. The screens continued to thrum with laughter and I vaguely felt sorry for the oil delivery guy that got caught between me and her on this blustery morning.

Before I fired up the furnace to breathe warmth back into my old house, I needed to go into the basement and check the filter, prime the fuel pump if it needed it and just give everything a quick once-over.  I put on my ever present boots next to the back door of the house, donned a baseball hat and walked out the door. The rain was fine and misty and quickly dampened my sweatshirt on the twenty foot walk to the basement entrance. I opened the door and stepped into the passageway into the underworld. I pulled up short feeling a gossamer net enshroud my face and a sudden gust of wind set the trees around the house into a sudden fit of shaking and rustling. Mother Nature was laughing her ass off.

I reached around behind the door to turn on the light and of course it was burnt out. I had forgotten about the entry light popping and going out when I had ventured into the basement a few months ago and I hadn’t brought a flashlight with me. As I retraced my steps to the house, each passing moment added more and more liquid to the filmy web that was covering the entire front of my body. By the time I reached the door to the house, my navy blue sweatshirt had taken on the shimmering appearance of the night sky. An inky background with twinkling points of light reflected from the light coming from my home office adorned my chest. Although intrinsically miffed at Mother Nature for covering me in cobwebs, I couldn’t help but to be moved by the delicate beauty.

Frustrated, I picked up the flashlight that I kept on my desk and headed back out the door. About half way to the basement entrance, I stumbled upon a two-inch tree limb that had been lurking under a cover of freshly fallen wet leaves. Once again the trees all about swayed and moaned with the hilarity of it. I shot the ground a dirty look, not that it cared in the least, silently vowing to the stick that it would pay for that little trick.

I once again opened the basement door and then brought the halcyon beam of the flashlight to bear. As the wet and the rain pressed in behind me, I had a fleeting vision of myself returning to the house for my revolver, a decorative bullwhip that my grandma had purchased for me on a trip to Dallas and something that resembled a fedora. I also wondered if the stick I had tripped over would make a good torch if the end was wrapped with cloth and dipped in pitch. The short flight of steps into my basement looked spectacularly like the opening scene going into the catacombs in Raiders of the Lost Ark. I looked over my shoulder just to be sure there wasn’t a giant rock ready to flatten me on the stairs below.

The trees and the screens droned on in their cacophony of laughter. Mentally I used my middle finger and flicked my king off of the chess board hard and mumbled to myself, “bitch.”