There seem to be two schools of thought when it comes to reading books in a series. Many readers pick up the first novel in a series and then wait with relish for the next installment, sometimes for years before they can scratch that itch of anticipation. Other readers look at a book, notice that it’s in a series and set it aside for inspection once the “final” installment has hit the bookstores. I am of the latter persuasion.

I can understand both mentalities. For those who like to wait, it’s almost like waiting for your favorite holiday to roll around each year. The anticipation 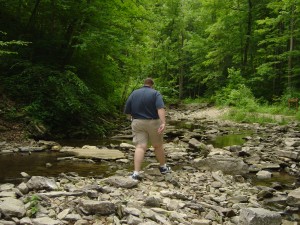 adds to the enjoyment once it finally arrives. If you had a birthday party once a week instead of once a year, you would probably start to take it for granted. On the other hand, if you’re really enjoying the book, waiting on the next book in the series can be as much of an annoyance as a delight.

For example, I received Eragon for Christmas a couple of years ago. I promptly read the book not realizing that it was the first book in a trilogy by Christopher Paolini. The movie based on the novel came out over a year ago and I have now read the second book, but the last time I checked the third book had still not been released. I like the story, but I didn’t enjoy the second book as much and the long pause will probably make me enjoy the final book even less.

For those of us who don’t like to wait, the problem isn’t necessarily a lack of patience but more of a nagging feeling about leaving something incomplete. I can’t work on two or three books at once; I have to read a book cover-to-cover before moving on to the next. This habit was born in elementary school when reading the Lord of the Rings and Chronicles of Narnia series. I was able to pick up book one and not stop reading until I was done with all of them.

I finally read the entire Harry Potter series of novels last year after book seven was finally on the shelves. The series had been recommended to me for years, and I knew that I would enjoy them once I was able to read them, but my reading habits demanded patience on my behalf and I was not disappointed. I don’t think I would have enjoyed them as much if I had to wait between books.

I think I am on the path less taken. It seems like most people buy that newest book as soon as it hits the shelf, but I’m happy waiting for the box sets once they’ve all been released.