At my last job, I sold Panasonic Toughbook computers. These laptops were expensive. Not a little expensive, a lot expensive. You couldn’t buy one for under $1500 and they weren’t going to win any competition for the fastest processor or the best video card but they would take a beating. I asked for a demo laptop to take on sales calls and couldn’t get a new one because the company only wanted to invest in a limited number per year. OK. Dead end. Not quite. Our service technician had a 9-year-old Toughbook that just sat on his desk because it literally took 25 minutes to boot into Windows XP Pro. So I went to our IT Department and got him a newer one that could load XP in about 5 minutes so our technician was more likely to use it. Then I confirmed with our IT guy that from a day-to-day usage perspective, the old Toughbook was obsolete. 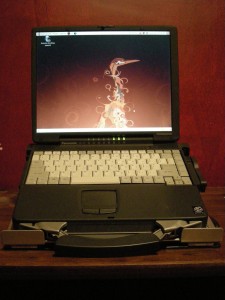 So I now had an old CF-71 that I could pretty much do with whatever I wanted as a demo machine (pictured here with Ubuntu Hardy Heron installed – why do all these operating systems have to have animal names?). Look, Toughbooks are durable, drop it on the ground and it still works. Everything except the 4GB hard drive that now makes a weird ticking sound. Note to self, don’t do that in front of a customer. I went to the one of the local PC repair shops and spent my own money on a used drive. I didn’t see any point in reinstalling Windows, and so began my excursion into Linux.

One of the most interesting things I found with Linux is the number of different versions which can be run from a Live CD. You don’t need to permanently install the OS in order to use it on your PC. I tried about 7 different versions before I settled on PC Linux OS. It seemed fairly similar to Windows, most of the hardware was recognized by the default installation, and it booted in about a minute. Huge performance boost for that old Pentium III processor.

For very basic PC users who only surf the web, check their email, and occasionally write a text document or spreadsheet, I think Linux is brilliant. If you are not an advanced user, it doesn’t readily lend itself to tampering around with things that don’t need it. This eliminates the dreaded, click-happy problem. “It said my computer had a virus, so click here and I did.” Doh. For this reason, I thought that selling Linux boxes at the big box stores would be a big success. It didn’t turn out that way because the selling point was “cheap” and not “hassle-free.” Linux still has a stigma for being something that geeks play around with and that basic PC users should stick with something like Windows Vista Home. Since there are hundreds of versions of Linux, I can see why it retains this status.

Having gone through 7 different versions, I can say there is a distro (Linux speak for version), for just about everybody. Each release has a customized list of features that are built for a target market – networking pros, designers, gamers, you name it. Ubuntu seems to be the most well-rounded of the Linux distributions. I have been playing around with it for the last few weeks and it handles hardware very well. It also seems to be the most polished of the distros that I have tried because the menus are well organized and the software is tightly integrated. In other versions there are sometimes three or four programs that do similar functions and the menus get very convoluted.