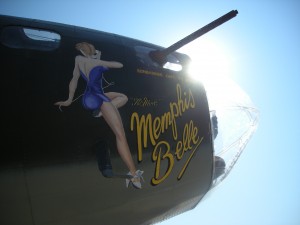 Over the weekend, I went to Victory Days, a step back in time to the mid-40s. It was truly impressive the lengths to which the reenactors were willing to go to realistically depict the era. The event featured everything from a front-line skirmish between U.S. and German troops, a fully-functional mess tent which fed the reenactors for three days, a field hospital, a small German encampment, a nod in the direction of the Japanese, and of course, the warbirds. Check out my shutterfly page for more pictures.

I went with a friend from my last job who is somewhat of a WWII buff. He and I listened to a German reenactor talk about his MG-42 machine gun for about half an hour. It was interesting to see how some of the reenactors tried to stay in character while others just wanted to educate the spectators as much as possible. Mark sat on the ground under the “Memphis Bell” for almost an hour listening to a veteran tell stories about his experiences as the belly gunner in a B-17 Flying Fortress just like the Belle.

My favorite part of the show was the row of seven P-51 Mustangs. To have that many rare, operational P-51s in one place was unbelievable. Well worth the $20 at the gate. It was a very worth-while trip, and I highly recommend going if the show is within a reasonable driving distance.